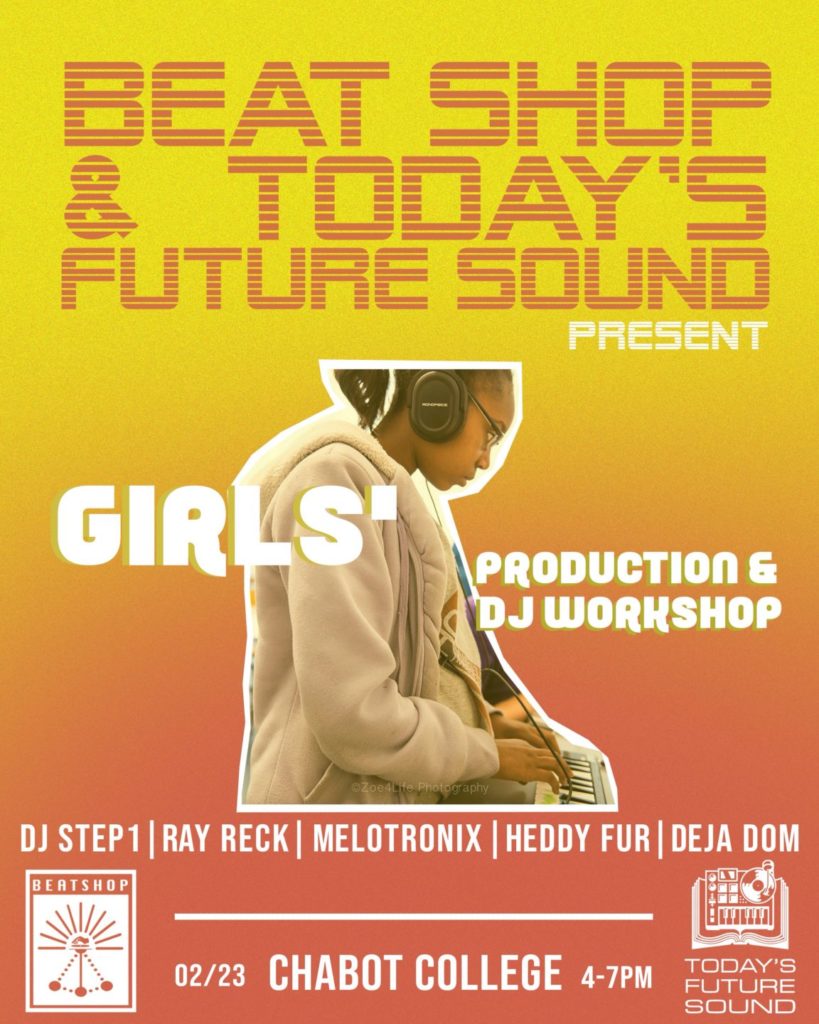 Beat Shop and Today’s Future Sound are coming together to offer a production and DJ workshop to girls ages 8-18. 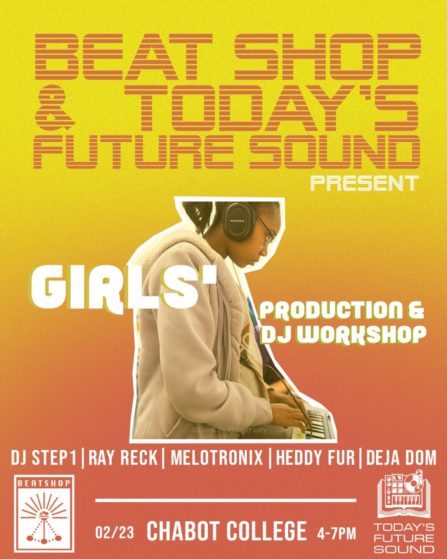 6:00pm – 7:00pm Instructors will demonstrate skills in real time, applying the techniques covered in the workshop in live DJ and beat performances.

Stefanie Andersen (Step1) is a producer and turntablist who is known for her action-packed performances that combine scratching, finger drumming, and live production. She was recently featured by Ableton as a Push performance artist. Stefanie has an extensive background in education and music scholarship—she received her Master’s degree in cultural studies and has taught university-level courses about hip-hop. She currently owns a music production school in the Bay Area called Sequence One, where she teaches Ableton to the next generation of producers.

Ms Melotronix, based out of Oakland, California, is a music-maker, producer, and vocalist. She brings her own twist to the “art of noise”. Armed with her beat machines, mixer, laptop, and microphone, she blends heavy chunky funky bass lines with etheric overtones (of flutes, harps, sitar, and more), while singing over her creation. Since 1999, Melotronix has been mixing dope tracks & producing her own music. She moved to Montreal in the 90s and had the pleasure of living below Kid Koala on St. Domonique St. Her first experience with the Technics 1200s was on his decks and after a long night of mixing and scratching, she was determined to get her own set. She started to experiment in the realm of turntablism, house, hip hop, and started to collect an eclectic set of vinyl. In 2002, Melotronix moved to Phoenix, AZ, the “Valley of the Sun” and this is where she really dove into DJ-ing, singing and performing all over the 5th largest city in the country. Melotronix was one of the first regular DJs for the now infamous Culture Shock monthly events, as well as other legendary weeklies, monthlies and one-offs in the Valley of the Sun. While living in Tempe, AZ, she was introduced to the BrokenBeat crew in San Diego, and joined the crew in 2010. In 2018 she became a resident DJ and sound engineer for Beat Shop!!

Heddy Fur was born Hayley Shula in the ultra rural town of Swanville, Maine on January 12th, 1984. From a young age she felt connected to nature and the spirit of song. She began learning the piano at age 6, and would sing and make up songs for her family. At the age of 9 she was exposed to R&B and New Jack Swing music and fell in love with the contrast of soft vocals and hard drums. Heddy Fur was given a four track and began recording her own vocals over Hip Hop instrumentals. As time went on she learned different recording and production methods, and soon began performing them live. Heddy is a professional piano instructor and teaches workshops in music production at schools, summer camps, and learning centers. She is also a certified sound healer and enjoys bringing vibrational elements into her production and performances.

All proceeds go to the organizations in support of future community events and workshops promoting music education, enrichment, and exposure for underserved and minority populations.