Beats4Lunch – What we are thankful for

As many of you know (although some may not), we are in the midst of our first IndieGoGo fundraising campaign to support and develop the Beats4Lunch program at West Oakland Middle School (WOMS). Beats4Lunch is our flagship program that began shortly after the inception of TFS. This Thanksgiving, in the the spirits of giving thanks and reflecting we asked our WOMS students, faculty/teachers and TFS staff/instructors to reflect on what we are thankful for during the holiday season. I, too, enumerated many things that I personally am thankful for, as well as organizations, companies and individuals to whom I am grateful and have supported TFS. I simply unable to name everyone so I thought I would write this post to recognize all the generous parties who have contributed and enable us to serve the youth of West Oakland.

I was first brought to WOMS by Ben Durazzo, aka Durazzo, who came up with the name Today’s Future Sound and with whom I founded TFS. Ben and I taught in the after school program, but it was Kahlil-Jacobs Fantauzzi who brought us into the culture of the school and made possible our teaching during the school day. To him we are very grateful—he integrated us into his classroom and believed in the program. We are also grateful to the staff and administration of WOMS (including former principal Ron Smith, current principal Clara Roberts and assistant principal Kino Carson) for enabling us to work with the students there. On a weekly basis for more than two years now they have let us use their school and classrooms as a space to teach. Ms. Thomas has supervised us from the beginning and Mr. Saeed has let us use his room—we simply couldn’t have done it without them! I am so indebted to all my staff and volunteers—I simply COULD NOT do any of this without you! This includes staff, volunteer instructors, our interns (shouts to our new development and design interns Nick Pino, Ariel Herbert, Patrick Hibberd), and members of community that have supported us over the past two years. Kate Klingensmith is our guardian angel who has supported us in every sense from the beginning. Rosa Boshier has been a really fundamental part of enabling our work through help with development and strategic work—behind the scenes and back-end stuff that most people don’t know or think about but is fundamentally important. David Hopkins, a newer member of the team, has been a really integral part of our social media and fundraising strategy as well. Our fiscal sponsor Friends of Oakland Parks and Recreation and Executive Director Ken Lupoff gets major shouts for taking us on and working tirelessly, and Erik Ludwig for the intro to FOPR!

At TFS we depend and have depended in large part on grants from organizations like Oakland Fund For the Arts, The Bill Graham Foundation, Philanthropic Ventures Foundation/The Barkley Fund, and Center for Cultural Innovation. We also thank our partners at Bay Area Community Resources and Oakland Fund for Children and Youth for their continued support. We also require computers, headphones and equipment in order to teach, and Pandora‘s donation of computers and equipment has played a vital role in our ability to teach our students (big shouts to Dave Hampian). Keith McMillen Instruments has provided us with many QuNeo and QuNexus MIDI controllers, both for our students and teaching in the classroom, as well as prizes for our beat battle fundraisers. Image-Line Software (makers of FL Studio, one of our main beat making programs we use to teach) have been tremendously supportive in supplying us with licenses for teaching. We are also thankful to Focusrite/Novation (big shouts to Miriam Wiener!!!) who have helped us with gear for teaching. Guitar Center (Daniel Lee and Carlo Rodas) has also been very important with helping to provide gear. Magma Bags and their US Distributor Mixware have also not only given us gear essential for teaching, but the bags to transport and protect this gear, plus Lifeproof helping us to protect our phones (thanks Noah!!!), iPads and electronic gear. Free Gold Watch has always held us down in terms of printing our t-shirts, as well as the printing for the custom TFS Magma Bags! I also have to thank my family for supporting and believing in me. We hope that we can continue to have the support of the community and ask that anyone who is able make contributions to our Beats4Lunch IndieGoGo campaign donates and/or shares the campaign and work of TFS: https://www.indiegogo.com/projects/tfs-beats4lunch-at-west-oakland-middle-school 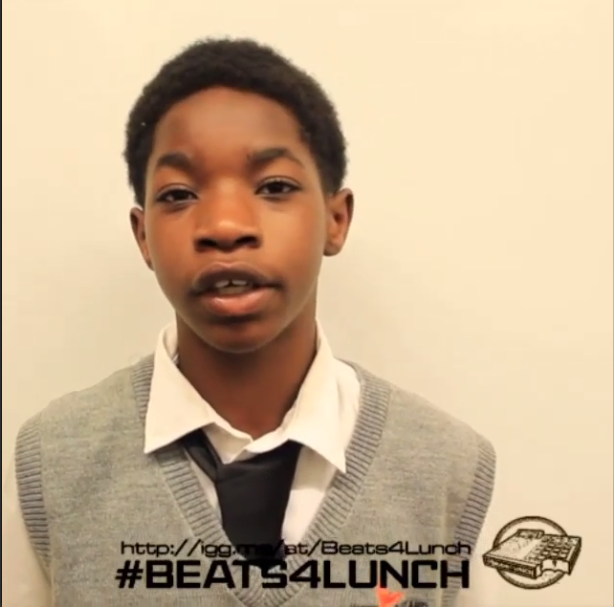 We are giving thanks with these videos and also with the killer giveaways for donors to our @indiegogo campaign. We have Hoodies, T’s, Beat tapes, Sticker Packs & so much more that are perfect gifts for friends, family or yourself. CHECK THE GEAR at http://igg.me/at/beats4lunch #Beats4Lunch #TFSGivesThanks #Thanksgiving #GivingThanks #Thankful #Beatmaking #HipHopEd #MusicEducation #Oakland #BayArea #Youth #STEM #STEAM #YouthArts #HolidayShopping #todaysfuturesound

We at Today’s Future Sound and West Oakland Middle School are so thankful for the #Beats4Lunch program, we had to share! PLEASE DONATE TODAY at http://igg.me/at/beats4lunch to support these youth and their access to the arts. If we’re this thankful now, just imagine if you help us reach our goal of $10,000. #TFSGivesThanks #Thanksgiving #GivingThanks #Thankful #Beatmaking #HipHopEd #MusicEducation #Oakland #BayArea #Youth #STEM #STEAM #YouthArts @indiegogo #todaysfuturesound A video posted by Today’s Future Sound (@todaysfuturesound) on Nov 11, 2014 at 11:36am PST

We at Today’s Future Sound and West Oakland Middle School are so thankful for the #Beats4Lunch program, we had to share! West Oakland Middle School faculty Mr. Saeed, Ms. Thomas and Mr. Scott say what they are thankful for! @tfs_beats #todaysfuturesound thanks them! PLEASE DONATE TODAY at http://igg.me/at/beats4lunch to support these youth and their access to the arts. If we’re this thankful now, just imagine if you help us reach our goal of $10,000. #TFSGivesThanks #Thanksgiving #GivingThanks #Thankful #Beatmaking #HipHopEd #MusicEducation #Oakland #BayArea #Youth #STEM #STEAM #YouthArts @indiegogo